seven protective tunics and ritual garments on the way...

to the Heyman Center for the Humanities at the Columbia University. 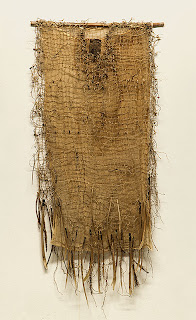 The action of this protective clothing made from hemp yarn and calabash fertility seeds “written” in a pseudo-script, is reinforced by the “magic” power of the knot knitting net and the healing properties of dried Aloe Vera flowers.

An inscribed confession cloth, which relieves the possessor of his or her harmful secrets. The fact that it’s specifically designed and tailored to fit the physical and spiritual character of the owner, enhances the peplos’ ability to provide relief.

On the South Mediterranean coast script is believed to have a magical force and the written word is thought to provide protection. The amuletic ornament of the reed, which is concurrently a writing implement, is “written” in Greek, Arabic and Tifinagh scripts. 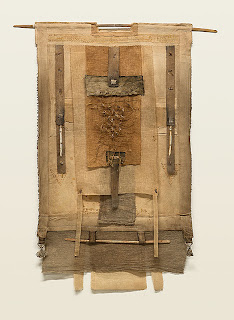 The calabash “written” seeds knotted on this talismanic cloth are a strong fertility symbol in North Africa meant to be recited as magical incantations. 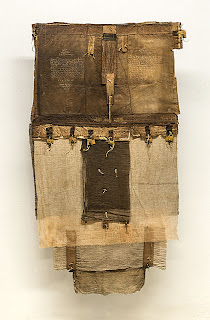 A tunic made of cotton permeated with vegetable dye roots, bark and leaves inscribed and “charged” in a mystical way. The sound of the copper bells follows the ritual of the wearer in action. 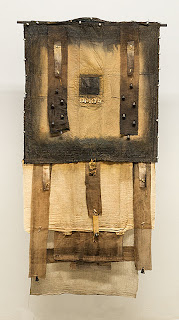 A tunic made of cotton permeated with vegetable dye from roots, bark and leaves inscribed and “charged” in a mystical way. The sound of the tiny bells follows the ritual of the wearer in action. 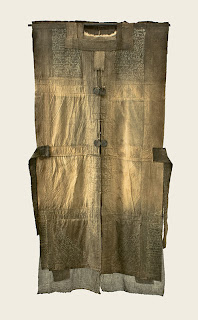 A supernatural cloth-shield garment to ward off the evil eye and all evil intentions, activated even by a simple touch. The “written” verses of Gibran emit their protection through Art.

The spectator revisits the symbols again in order to reactivate ancient bonds with the eternal subject of supernatural protection drawn from the continuous exchange across this specific geographic and cultural area with its distinctive indigenous scripts.

Irini Gonou was born in Athens. She studied sculpture at the Ecole Nationale Superieure des Beaux-Arts and at the Ecole Nationale Superieure des Arts Decoratifs in Paris. From 1980 she has shown her work in thirty two solo exhibitions and she has participated in many group exhibitions in Greece and abroad. Her artwork is included to a variety of important public and private collections in Greece and abroad. She lives and works in Athens.     www.irinigonou.gr